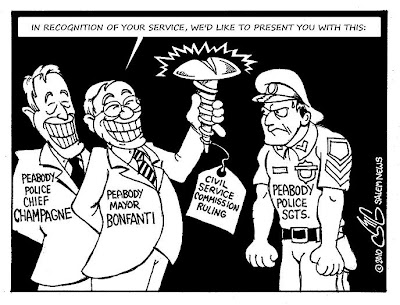 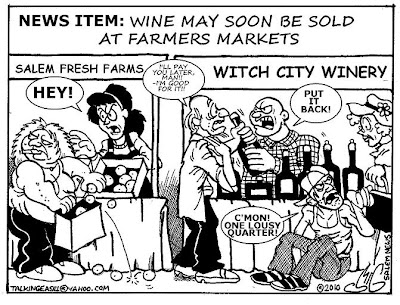 Two more cartoons that were submitted to THE SALEM NEWS but rejected:

The first one concerns Downtown Peabody making Police sergeants take on duties that should have been performed by higher ranking officers.(All against Union rules, of course) Doing this also screwed up promotions for some of these officers, But since it saved money, Peabody's Mayor and Police Chief are all right about it..

The second one is about Salem's local farmers market wanting to sell booze from local wineries, but is currently prevented by alcohol laws. I was wondering just what other kind of Salem "Local product " the wineries may attract. I think Booze is better off sold in a building, Not outside in an open public area were most anyone can congregate.
Posted by Chris Smigliano at 6:25 PM No comments: 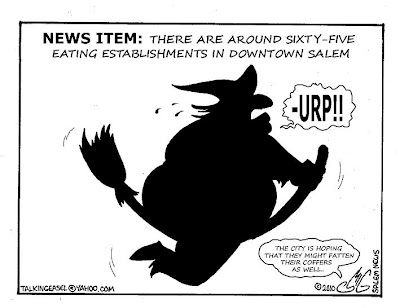 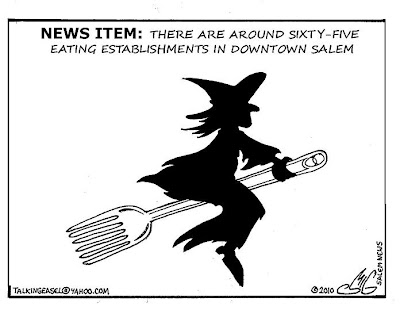 Published 07/28/2010 in THE SALEM NEWS: The Paper ran an article about the new restaurant boom in Downtown Salem and the hopes the city has for its success. I know Salem is no Boston or New York, but given its size and locality, 65 eating joints is quite a thing. Given this, I decided to have a bit of fun with the city logo . The top image is the one the NEWS printed. The lower one is an alternative idea. I sent BOTH to mt editor at the same time and told HIM to choose the one he liked best.
Posted by Chris Smigliano at 7:16 PM No comments: 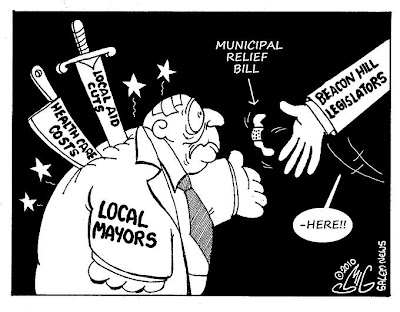 Published in THE SALEM (MA) NEWS 07/22/2010: A special Municipal Relief Bill turned out to be a lot less relieving as hoped..
Posted by Chris Smigliano at 4:43 PM No comments:

For Art's Sake: Just In Time For San Diego! 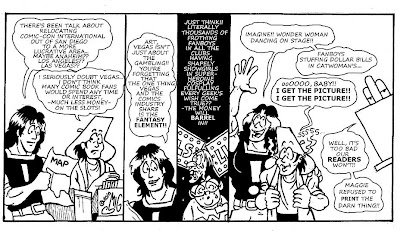 My latest FOR ART'S SAKE from COMICS BUYER'S GUIDE#1669. There's been talk about the biggest industry convention, COMIC-CON INTERNATIONAL (the SAN DIEGO COMIC-CON)actually relocating to another part of California after 2012.(After 40 YEARS!) From what I understand things are still "in negotiation" right now. This is MY take..
Posted by Chris Smigliano at 5:04 PM No comments: 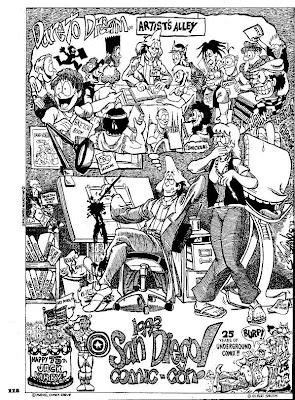 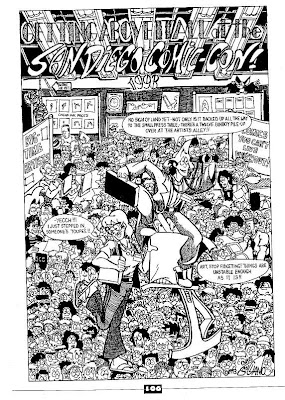 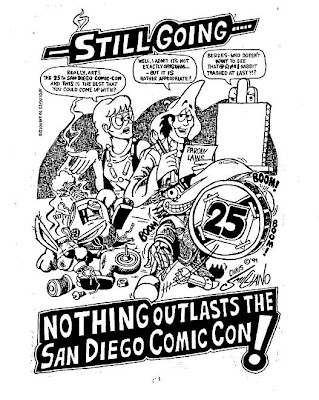 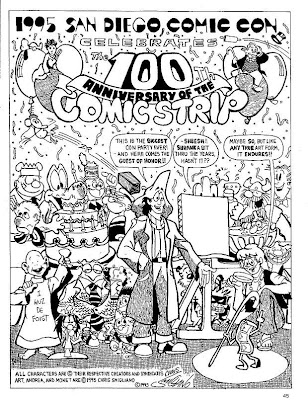 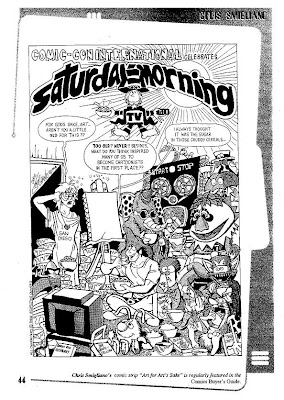 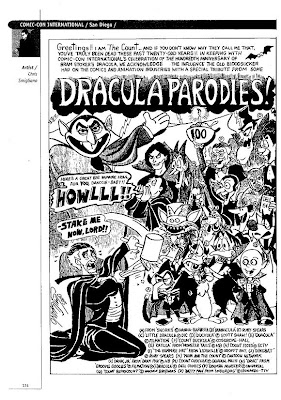 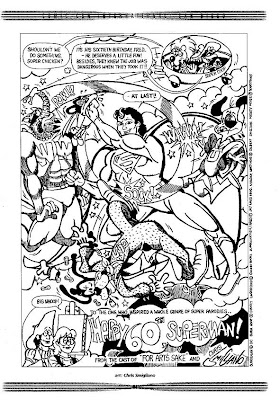 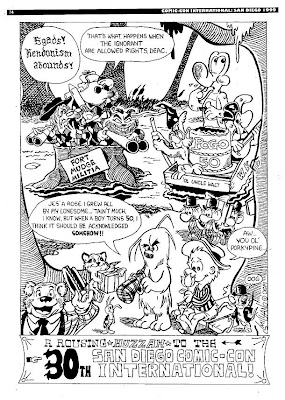 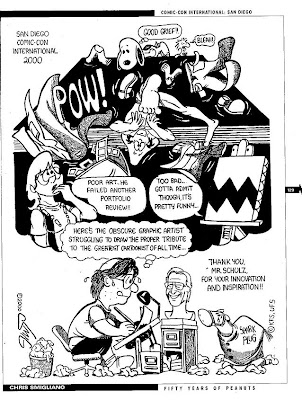 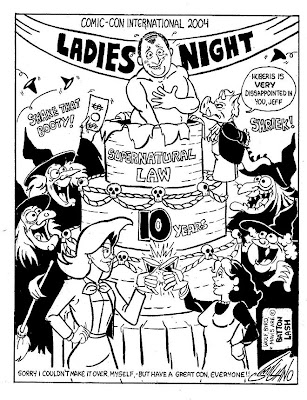 With the 40th Anniversary of Comic-Con International (San Diego Comic Con) just around the bend at this writing, I'd figure I'd acknowlege it by posting the Artwork I submitted to it thru the years. I was a steady Con-goer for about ten years until changes in my circumstances made it no longer feasible (That's life) but I still follow it, even though it's not quite the same as actually experiencing it. Well, at bleast I don't have to fight off the crowds.
All in all, despite what they say about how the con has grown these into more of a hollywood trade show, I think any budding cartoonist should at least go to the con once. I've met many nice and supportive people, saw a lot of great things, had a lot of great times..Hopefully I'll be able to make it there again someday..
Posted by Chris Smigliano at 5:32 PM No comments:

My Earliest Existing/Published Work i.e; If You Think My Stuff Is Bad NOW... 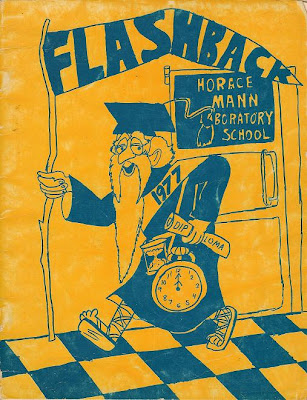 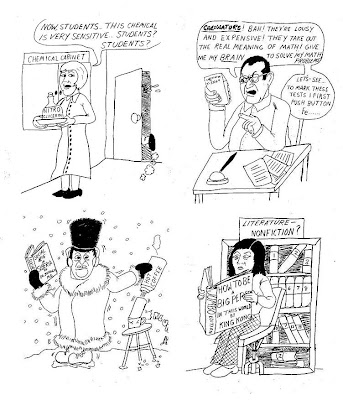 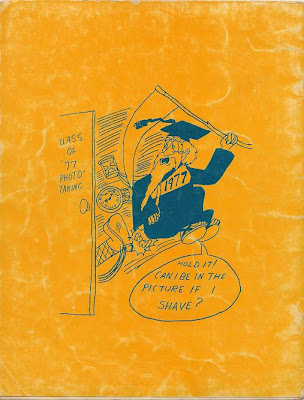 This is probably the oldest example of my earlier work I stil have: The 1977 Horace Mann Public School Yearbook. The upper and lower color pieces are the front and back covers, respectively, and the middle piece is my interior artwork. The drawings are of the graduating class homeroom teachers. (Mrs. Carpenter, Mr. Emmith, Dr. Mayers, and Mrs. Yaffa) My art and woodshop teachers were Mrs. Gauthier and Mr. Capuccio.
Pretty amazing when the teachers actually WANT to have cartoons made of them!
Posted by Chris Smigliano at 6:05 PM No comments: 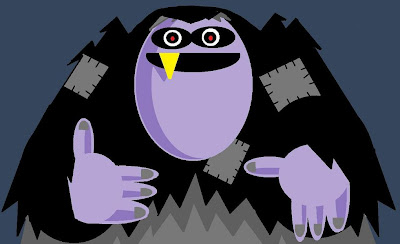 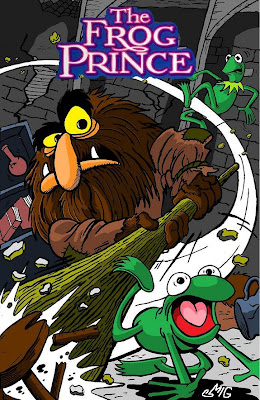 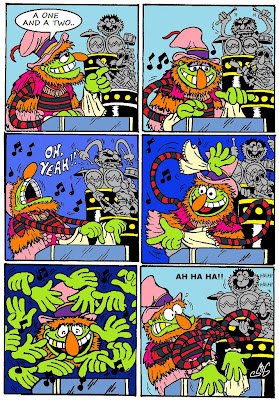 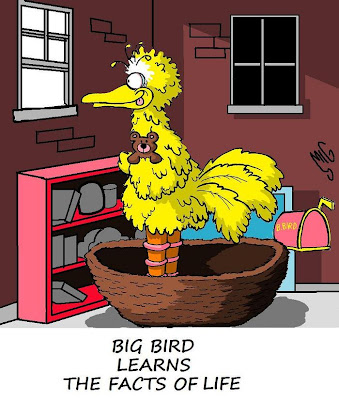 My latest Muppet fanart pieces from the TOUGHPIGS website www.toughpigs.com

1: A stylization of Taminella Grinderfall. Taminella;I.E "The Witchiest Witch in Witchdom" was part of the Muppets during the early-mid sixties and performed by the late Jerry Juhl, who became the Muppet's Head Writer. She was used for PAK-KNIT commercials and was the main villian in the unaired "Tales of the Tinkerdee" pilot.
Taminella's final Muppets appearance was in the special "The Frog Prince", and at this point though Juhl still voiced her, she was puppeteered by the late Richard Hunt. (geez, this post almost seems like an obituary) Tammy was retired after that, and I think it's a shame that they never tried to bring her back. Juhl may have passed away, but Puppeteer Terry Agnus did a witch character on his show BLIZZARD ISLAND that headmitted was inspired by Taminella. If the Muppets Studio ever considers reviving Taminella, they should hire this guy!

2: A faux cover for how an adaptation of the Muppet's FROG PRINCE might have looked.

3: A comic-strip of Dr. Teeth. the good Doctor has always been another favorite of mine and I'm amazed they never came up with this gag on THE MUPPET SHOW.

4:This piece I call "The Muppet Musical Scale". This is a new version of a piece I originally submitted to MUPPET MAGAZINE. Editor Jim Lewis liked it, but it couldn't be used. (I was CONSTANTLY sending submissions to Jim Lewis to the point I made the poor guy's life a living Hell. My apologies, Mr. Lewis.)

5: I'm going to burn in Hell for this one, or at least get hanged in effingy from the SESAME STREET signpost. Has anyone considered that he MIGHT just be watching cable TV?
Posted by Chris Smigliano at 5:16 PM No comments: 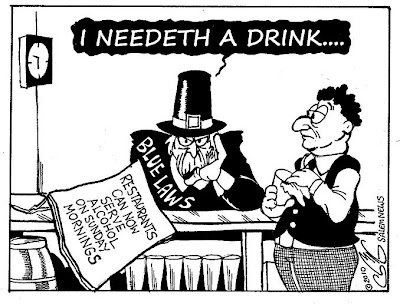 Published 07/07/2010. This one pretty much says it all.Now you can get wasted as early at ten-thirty in the morning! On a Sunday, too! Too bad My system can't stomach alcohol..
Posted by Chris Smigliano at 4:25 PM No comments: 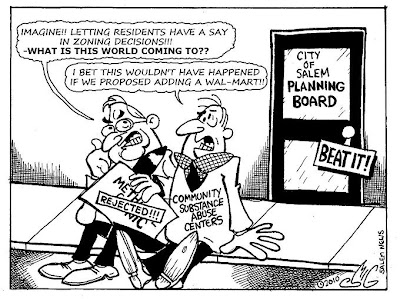 Published 07/06/2010: The outrage over the proposed Meth clinic is forcing some changes in the local zoning laws- and in one unexpected way!
Posted by Chris Smigliano at 4:20 PM No comments: 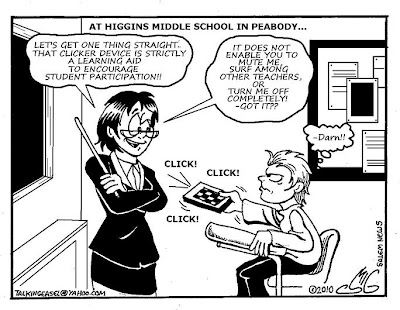 Another rejected cartoon for THE SALEM (MA) NEWS: Perhaps this one was a bit too obvious? Guess it didn't have a "remote" chance of passing.
Posted by Chris Smigliano at 4:16 PM No comments: