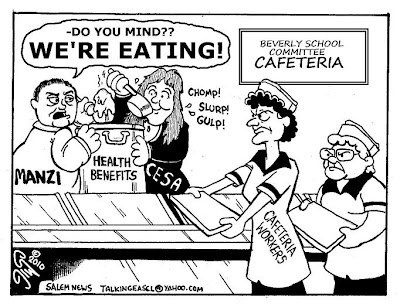 Published on 05/27/2010:Basically, Two members of the Beverly School Committee want to cut the hours of their part-time school cafetria workers to a point where they don't have to pay them health benefits.(Budget cuts, you know) And the school committee members-who probably spends LESS time working on the committee(And make a LOT more) than the workers do on the cafeteria-want to keep THEIR benefits, of course.. You can find the whole story at www.salemnews.com
Posted by Chris Smigliano at 5:56 PM No comments: 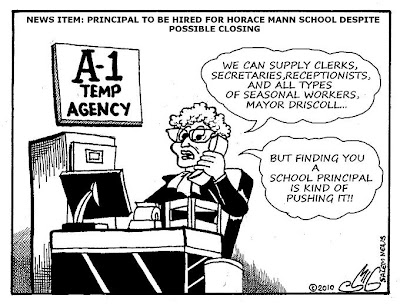 Local issue cartoon published in THE SALEM (MA) NEWS 0n 05/22/2010. One of our schools may still close, but they still want to hire a Principal for it. Isn't that kind of like choosing a new captain for the TITANIC while it's sinking?

Hmmm....Maybe I should have used THAT analogy in the cartoon instead.
Posted by Chris Smigliano at 8:00 PM No comments: 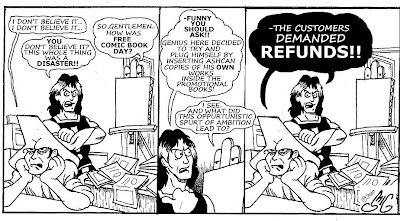 My latest installment of FOR ART'S SAKE from the latest issue of THE COMICS BUYERS GUIDE.
Posted by Chris Smigliano at 7:45 PM No comments: 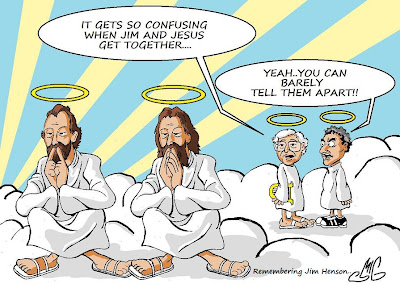 Twenty years ago, once of the most creative geniuses and one of the biggest influences in my life (Walt Kelly and Chuck Jones are among the others) passed away a little too suddenly and a little too soon. Jim Henson, with his unboundless creativity and imagination, gave a legacy of weird and wonderful memories-and a lot of laughter that I value more than I could ever express, in either words OR pictures.
I wish I could have met him.
I hope no one takes this pic as blasphemous. I've heard of Jim being resembled to Christ on occasion and I couldn't help wondering how it'd be if they met. It seemed like a good idea for a special-and slightly silly- tribute.
Posted by Chris Smigliano at 7:01 AM 1 comment: 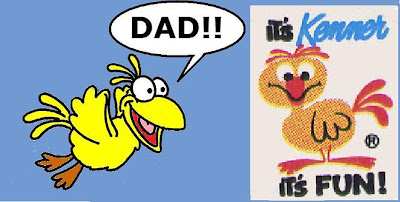 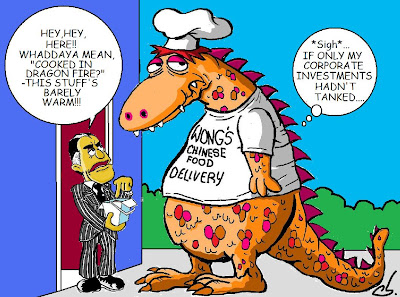 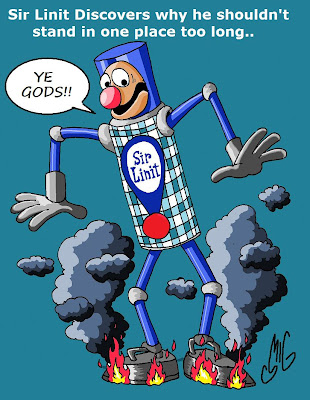 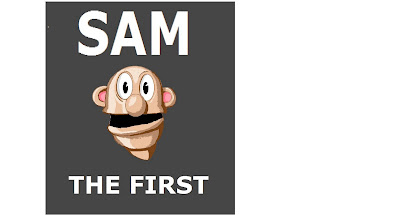 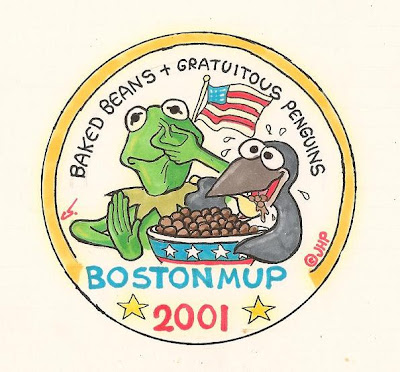 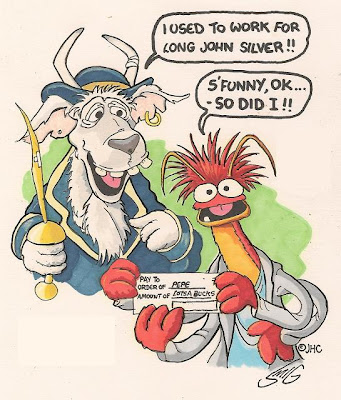 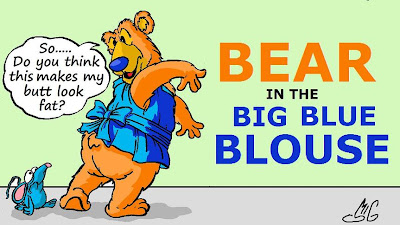 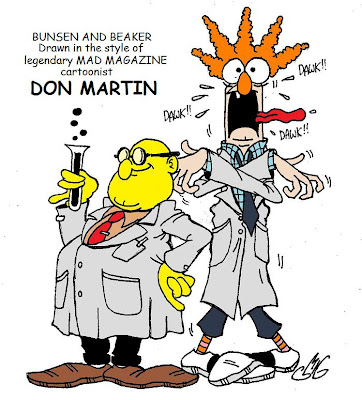 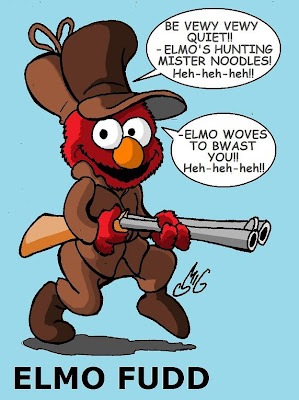 The latest fanart I did for www.toughpigs.com. some of the characters may not be so familar to you this time around. I used characters based om Muppets BEFORE Sesame street, ones Henson used in commercials, advertising, and even his own local TV show, SAM AND FRIENDS.
1: Sesame Street's LITTLE BIRD. Little Bird was originally used for a commercial for EASY-BAKE OVEN by the now defenct KENNER TOYS.He was meant to represent the company's mascot, THE KENNER GOONEY BIRD,which is seen in the company logo on the right.
2: THE LaCHOY DRAGON was one of Henson's earliest'full-body'muppets-preceding BIG BIRD- and was used to promote LaChoy Chinese food products, knocking over grocery shelves and setting everything on fire.
3: SIR LINIT was a marionette henson built for a commericial for an fabric treatment spray called LINIT.He would spray some of the product on clothing,and then iron the clothing using his iron feet, gliding around the fabric like an ice-skater.
4: SAM THE FIRST was a wacom tablet experiment using one of Henson's first charcters, the titular SAM from the show SAM AND FRIENDS.I call it Sam the "FIRST" because later on Henson came up with SAM the Eagle and SAM the Robot.
5: YORICK AS PAC-MAN. Yorick, a little purple skull-like creature was pretty much the first "Muppet Monster" Described by Jane Henson as a "Living Appetite" given that and the fact he's basicaaly just a head with a big mouth, it seemed apt to put him in the "Pac-Man"role, complete with Kermit-like Ghost Monsters.(Yes, Kermit was part of SAM AND FRIENDS, TOO)
The rest I think you can figure out on your own..
Posted by Chris Smigliano at 8:32 PM No comments: 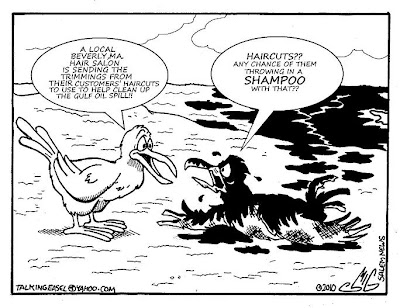 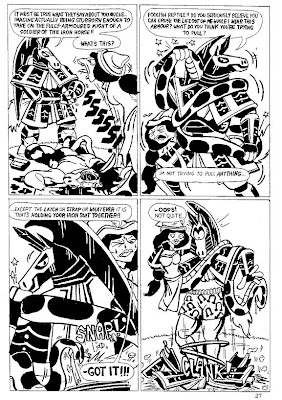 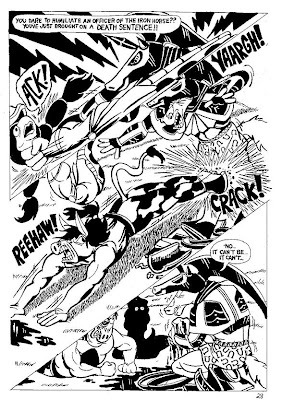 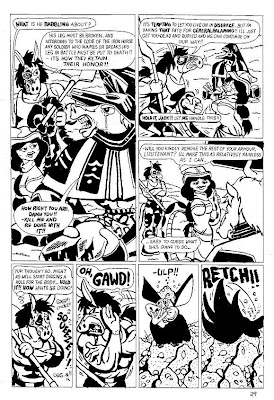 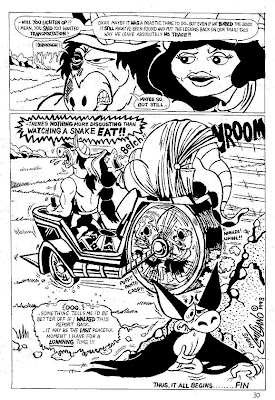 The sixth and last part of my unpublished saga JACK O' SPADE. This was both fun and dissapointing for me to work on, basically because even though I had meant this to go further than the story you read here, frankly, I couldn't figure out how to make anything work beyond this..All my ideas were becoming lame rip-offs of old plots from Sergio Aragones' GROO and Stan Sakai's USAGI YOJIMBO. I decided maybe best to consider this a enjoyable, but failed experiment.
Posted by Chris Smigliano at 6:48 PM No comments: 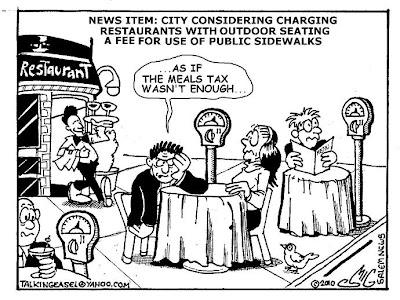 Restuarnt outdoor seating- especially on public sidewalks-is irking many on the city council lately..published 05/05/2010.
Posted by Chris Smigliano at 6:16 PM No comments: 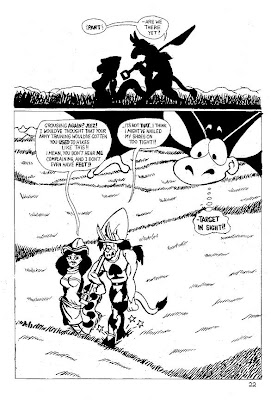 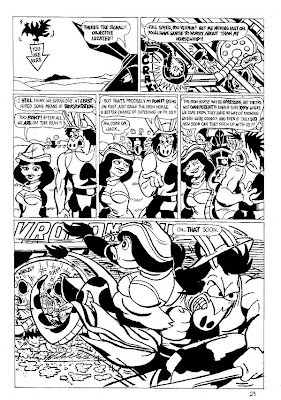 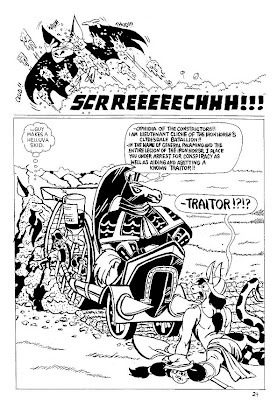 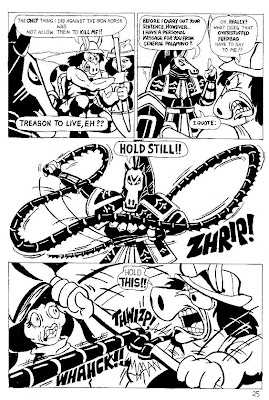 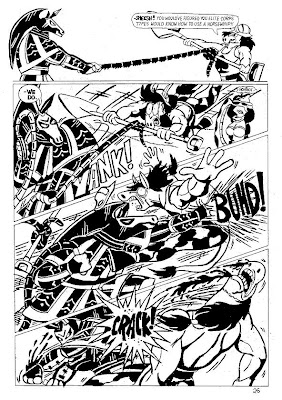 Part five of my unpublished comics saga. At least it begins to get brutal..
Posted by Chris Smigliano at 9:40 PM No comments: